The adventure that brought the ancient villa back to life began on 17 february 2008. The current owners of the villa, aware of its historical relevance, decided to keep it “alive”, making it available for meetings, feasts and ceremonies and giving it to the district of Gropello on an extended loan for special historical events or the celebration of civil weddings on the property. Gropello Cairoli, once Gropello Lomellina, has been recognized as a city in 2012 for patriotic merits. Here the birthplace of Carlo Cantoni (1840-1906), philosopher and senator of the first Italian Reign, has overseen the meetings of  prestigious people, such as Garibaldi and the Cairoli brothers, and has witnessed great passions and ideas during the Risorgimento.

Cantoni attended high school in Casale Monferrato, then his studies brought him in Germany and  Turin (there was no university in Pavia at the time), where he graduated. He started teaching in high schools in Turin and Milan; then, in 1869, he was appointed lecturer of Anthropology and Theoretical Philosophy at Accademia Scientifico-Letteraria in Milan.

In 1878 he was assigned the chair of Theoretic Philosophy at the re-built Literature Department of Pavia University, where he was also Dean during 28 years; he really aspired to this role, which he obtained after many difficulties.

This anxiety of his is frequently mentioned in his correspondence with Benedetto. An example could be the letter sent to him on 24 march 1874 in which he spoke about his designation as a professor at Pavia University, that you can read below:

[…] it seems that my designation as tenured professor has been put off to an unknown date […] it seems also that the council has applied to my case the maximum of law strictness […] so it seems that my designation requires  the implementation of art.69, which implies for me to be declared as  a famous man, and this has to be unanimous; it so easy that at least one of them finds me lacking in some aspect, and then I would be done!

On 12 april 1870 he married Cristina Magenta, his first cousin, who lived in Gropello as well and belonged to a wealthy family. The couple settled in Gropello, on the ancient Via Maestra, which at the time was called Corso Umberto 1° and then became Via Libertà, at the current 110.

Here Cantoni lived all his life with his “Nina”, how he used to call his wife, even though he owned another property in Pavia (in via Cardano) and another one in Milan, where he was domiciled for work reasons as results on the wedding act n. 36, preserved at Ufficio dello Stato civile in Gropello Cairoli. And it’s in his home in Gropello, as we can read in many letters written in the library and in his study, that he met academics and heroes of Risorgimento. In Gropello, small town of the Savoy reign, the five Cairoli brothers, renown as Eroi della Patria, seeked refugee in their country house when they escaped Pavia, back then dominated by Austro-Hungarians. The memorial monument with their remains is still open to the public.

So the villa was a silent watcher of crucial meetings, listener of relevant dialogues, accomplice in hopes for freedom and joyful with a reconstruction frenzy until the death of the philosopher in 1906; and then again it took part to the emotions and intuitions of the heir Alessandro Panzarasa, famous electrical engineer, who created structures well known all over the nation. Son of Carlo Panzarasa and Adele Cantoni, only 26 years younger than his philosopher uncle, he lost the mother when he was very young and lived at the villa ever since. It was his wife, the noble Silvia Cirla, a women of english origins that he married in december 1905, a lover of painting and arts, who decided to preserve the frescoes and the antique furniture we can find in the villa; it was also her who took care of the plantations in the park’s greenhouse.

Officially living in Milan, the couple lived in the villa during the dark period of the end of World War II, as we can infer from the letters exchanged with their daughter between 1947 and 1954.

The villa then became the country residence of the daughter Adele, her husband, the engineer Silvio Barletta, and their children until 2000, when they sold it not being interested anymore in maintaining the property.

The reopening of Villa Cantoni in the press 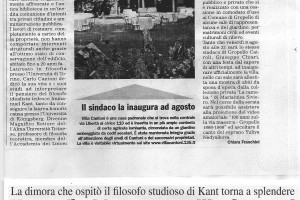 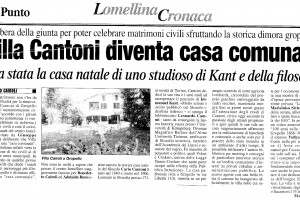 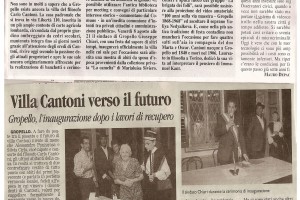 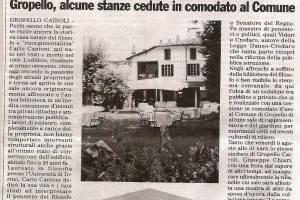